Smithers Purslow is looking to recruit building surveyors to help build the business and support the growth of it's team in the South East regional office in Reading. This role will suit an ambitious individual with drive, passion for customer service and who believes in our values. You could be based in Chelmsford, Redhill, Gatwick area or home based in the region.

The New Year means a New Board at Smithers Purslow

We begin 2020 with Chris Scott, Ken Porter, Mike Boast and Nathan Tilford, joining Steve Fraser and Andrew Bussey on our Board of Directors

Rutland-based & UK wide engineering, surveying and architectural practice, Smithers Purslow (SP), has celebrated 40 years in business by raising £40,000 for national and local charities. Monies raised were handed over at the cheque presentation afternoon on Tuesday 26 November at the Falcon Hotel, Uppingham

As part of its continued success plan and carrying on the path of phenomenal growth over recent years, Smithers Purslow (SP) is delighted to announce its acquisition of Byrom Clark Roberts (BCR) 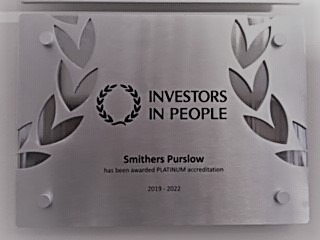 IIP Platinum Status is renewed for Smithers Purslow Until 2022

Smithers Purslow and Everards of Leicestershire are joint-sponsors of the local Rutland CAMRA Beer Festival & Ale Trail, which will take place at the Rutland County Museum, Oakham from June 27-30, 2019.

The BIBA Conference has a well-earned reputation for showcasing the most influential and inspiring business speakers to be found at any event. In 2019 BIBA will once again be ‘leading the way’. Smithers Purslow will once again be exhibiting there - Come along & see us on Stand A40